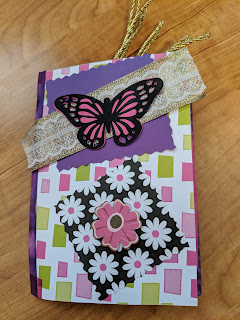 I've worked a lot on craft swaps for the last couple of weeks. That's introducing me to some awesome crafters and leading me to learning some new crafting techniques and some different types of paper crafts. 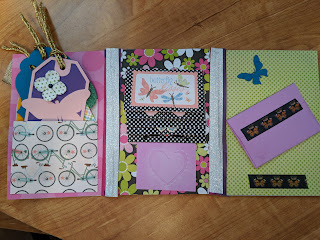 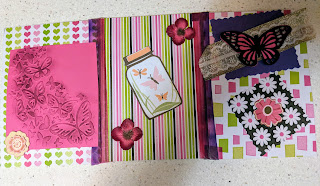 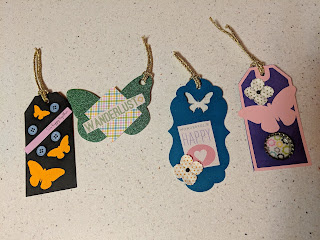 I filled the booklet full of little goodies like these handmade tags. I used my Cricut to cut out the tags.  Then, I added some embellishments to gussy it up. One thing this group is teaching me is that embellishments are everything.

I also added some other goodies to the booklet. The idea is to give your swap partner some goodies that they can use in future projects. I included some bits of printed cardstock, a bit of embossed paper, tons of tiny butterflies, which I cut using a butterfly punch, and some small flowers.

This is my second pocket letter card. My theme was alien invasion. 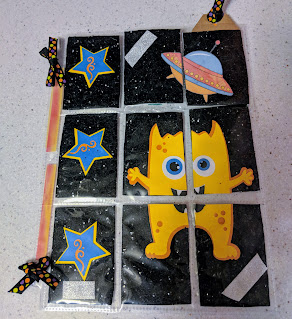 This black background is a thick shiny piece of cardstock. It's gorgeous, but it was a nightmare to cut. I killed the blade in my paper cutter with it and I'm pretty sure I dulled the blade in my Cricut as well. I finally ended up using scissors to cut off the edges. The end result is that the paper isn't exactly the same size in every pocket, but I did the best I could.

I downloaded the little monster from Printable Cuttable Creatables. 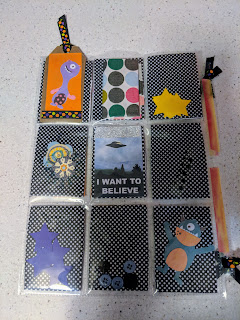 I filled the back of the pockets mostly with little embellishments, such as stars, buttons, etc. I added a few decorative elements, such as a quote from X-files and a couple of additional monsters, which came from a Cricut cartridge. 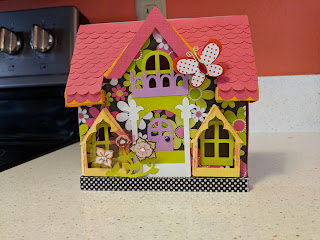 I fell in love with this little cottage pattern a couple of months ago. I waited to make it until I found the perfect paper.

The pattern is from SVG Cuts. It's called the Peony Cottage.

The roof was a real struggle on this little house. The first time I tried to make it, I think I used too much glue. A piece tore and I had to re-cut it. So, I started over.

I used a little ink on the window frames to make them pop. I generally wish that I hadn't done that. I don't think I did it very neatly. 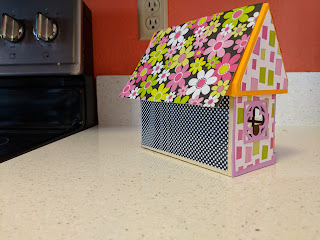 Honestly, I found this project frustrating. I had looked forward to making it for weeks, but the instructions felt incomplete. There were a lot of places where I felt like I needed to just figure the project out for myself.

One of my biggest problems with making the roof ended up being that I had folded the paper the wrong direction and "trained" it to fold backwards.

There was no point in the video tutorial where the instructor told me how I was suppose to be folding the paper. 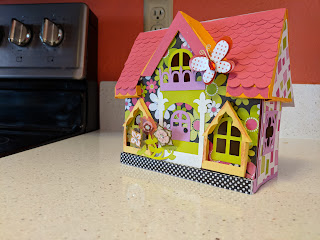 Likewise, a lot of decoration steps were skipped. I think the instructor used ink on some other parts of the cottage or she used a printed paper even though the printed instructions indicated that plain paper was used.

There were no instructions that explained where or how to put the patterned on the back of the house.

I still can't figure out why the front of my house around the door looks so different from the original SVG Cuts house.

The instructor must have added some paper to that part of the house that I didn't even have cut out. There were no instructions on how that section of my house look like hers.

I finally got aggravated by the project and discarded the paper flowers that I was suppose to use and grabbed some flowers from my embellishment stash. Then, I grabbed the butterfly sticker from the embellishments that I've received from one my craft swaps. I do think that the little butterfly adds an extra bit of oomph to the overall project.

This was one of SVG Cuts earlier project designs. The tutorials may be stronger on the newer projects. There is no question as to how incredible the designs are on the SVG Cuts website. The designer is phenomenal. Still, I was disappointed that I didn't enjoy this specific project.
- April 15, 2018 No comments: 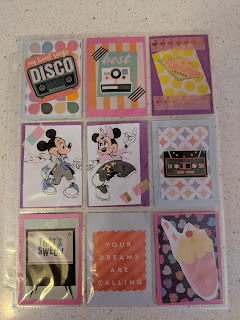 I discovered a cool paper project that connects paper crafting with pen pals it's called pocket letters. Apparently, this has been a thing for several years, but it's completely new to me.

You take a trading card sheet that contains 9 slots. Then, you fill each slot with mini cards. You might have a particular theme such as retro days, cats, Harry Potter, etc.

You might use photos, stickers, washi tape, tags, ribbons, or whatever other crafting goodies you have around the house.

After you've make your pocket letter, you fold it up to fit in a letter-sized envelope and send it off to a fellow crafter. That crafter sends you back a pocket letter in return.

Often these darling collections include a few crafting supplies for the recipient such as some washi tape samples or stickers. 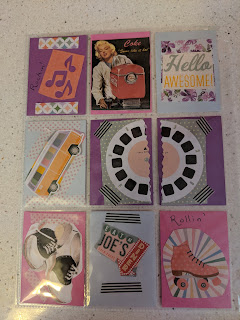 This is my first attempt at a pocket letter.  I went with an all-things retro sort of theme.

I didn't include crafting goodies in the pockets. Instead, as I folded up the pockets, I included a letter about myself along with a few package labels, a couple of stickers, and a bit of washi tape.

I posted a photo of one side of the pocket letter to a crafting group on Facebook and asked for someone to swap pockets with me. I found a taker within 5 minutes. Hopefully, that means that my first attempt isn't a total disaster. I'm still learning.

I can't wait to see what I receive in exchange.

I hope to start a collection of these pocket letters. This seems like a fun crafting project that I can continue to maintain even when my workload is heavy.

Email ThisBlogThis!Share to TwitterShare to FacebookShare to Pinterest
Labels: swap

This may be my favorite paper project so far. 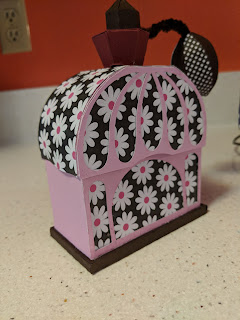 It wasn't what I intended to make during Easter weekend, however.

I purchased the pattern to make an adorable little house a couple of months ago. I hadn't made it yet because I wanted the perfect paper for it.

Then I stumbled onto one of the most beautiful paper packs I have ever seen and it was on sale for half price. I was elated. I had found the perfect paper for my special little house.

I cut the pieces out on Friday night and then I waited until the perfect time on Sunday to assemble the house. 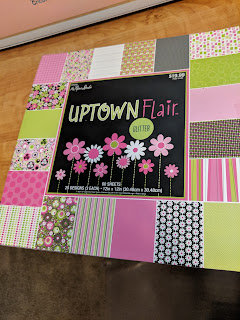 The little project fell into shambles almost immediately. I could not build the roof.

Admittedly, the instructions for the project were not as strong as they could have been, but I also used too much glue.

At any rate, my roof tore right at the beginning of the project. I tried to salvage it, but it was impossible. I was going to have to re-cut the first part of the project.

Re-cutting isn't the end of the world. I'm not expert paper crafter. I  have to re-cut from time to time, but in this case, I wasn't sure if I'd be able to finish the project even if I started from scratch. I was so disappointed in myself. I had waited weeks to make this one little project.

I knew that I wouldn't have much if any craft time for the rest of this week. I wanted to end the week with a crafty success story and I wanted to find a project that merited the use of my gorgeous new paper set. 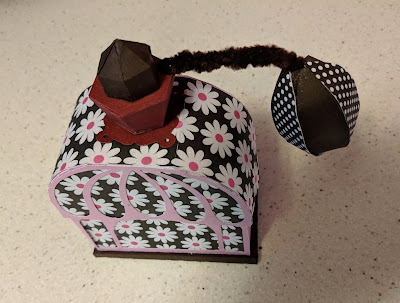 I went to a different designer's website and purchased the patterns to make a series of dainty boxes. The set is called Myrcella's Vanity.

The set is available on the Dreaming Tree website and includes the patterns to make one antique tray, an oil decanter, a jewelry box, and the Opaline Fragrance Box, which I made.

One has the option of buying each individual product rather than the full set, but since I wanted some things that would justify the use of my new paper, I just got the full set. I figure I'll make at least one more of the items in the set later.

The one thing I can always count on with Dreaming Tree is solid instructions for building a project. That's exactly what happened here.

Most of the project was very easy to assemble. I had some trouble with the last piece, the puffy ball at the end of the pipe cleaners. That was another gluey disaster. I'm not sure if there was more glue on the paper or on me. Besides that, I had completely glued the pieces together wrong.

I could have left the box as it was without that little ball, but I thought it added an extra cuteness factor. I waited until this morning and re-cut it. I re-assembled it with a clear head and glue free fingers.

Voila! My little box is complete.

Everything is made of paper except the two twisted pipe cleaners, which connect the box to the lid.

I want to give a little shout out to Dreaming Tree for this project. They saved me from some major weekend crafty gloom.
- April 02, 2018 2 comments: 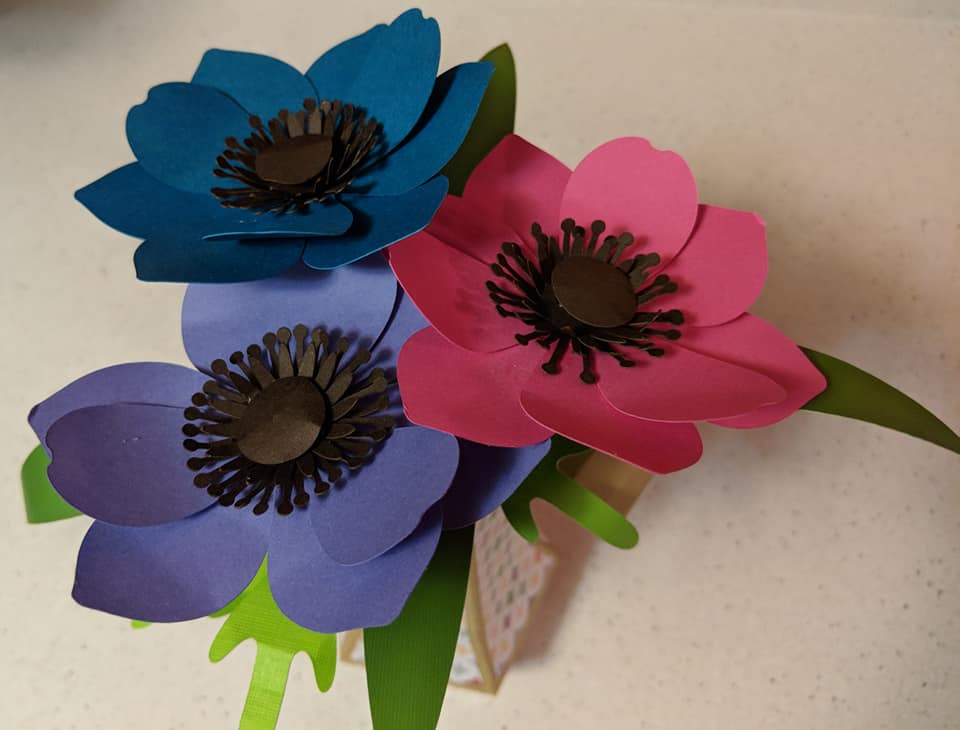 I hate paper cuts.
As I fold and crinkle, glue and tape, my fingers become wounded soldiers in a colorful world.
The blog is devoted to my love of making paper crafts, whether it be handmade cards or 3-D flowers.
For my day job I grade a different kind of papers. I teach journalism and ethics to college students. My paper crafting craze is my other life. Sometimes it's the place where I go to celebrate the successes of the real world. Other times it's the place I go when I just need a little escape.

Jenn Mackay
I'm a journalism professor with a love for furry critters and paper crafting. My assortment of colorful paper has gotten a bit out of control.